Artifact is a much more complicated game than other card games like Hearthstone or Magic the Gathering, so settle in. We'll start with the basics just to bring some of you guys up to speed, then in part 2 move onto some of the more advanced stuff.

Like most card games, in Artifact you play cards from hand, with a pool that refreshes and grows by 1 each turn. You fight for the board, and your units combat opponents units. That being said, Artifact has many features which make it wildly more nuanced:

In Artifact, you're playing cards and units on three different lanes. The objective of the game is to win 2 out of 3 lanes by destroying two of the 40-health towers that your opponent will be protecting, while simultaneously protecting your own.

Each player controls 3 towers, one for each lane. Lastly, you can also sometimes win by destroying an opponent Ancient, the 80 health building that you can start attacking in a lane after destroying the opponent's tower from that lane. This makes Artifact a game of sacrifice: you just need to win 2 out of 3 lanes, so you'll often have to intentionally lose a battle, to win a war. 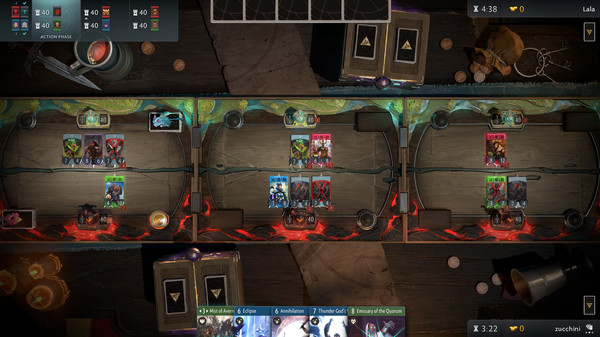 Combat in Artifact is straightforward: after both players are done playing their cards for that lane, every unit on both sides will attack the target its combat arrow is directed at, which in most normal cases, will be the unit or tower directly across from it. This makes positioning essential in Artifact, because it's unit positioning that also determines combat targets.

Each player has 5 essential units called heroes that you choose during deckbuilding. Heroes have strong stats, passive/active abilities, but also determine what cards you can play from hand at any given time.

There are four different colors in the game and you need a corresponding hero of that color to be present on the current active lane, to play a card there. This also means your can lock your opponent out of options by killing their hero, making Artifact extremely interactive. Lastly, heroes respawn 2 full turns after they die, and can be redeployed to any lane. 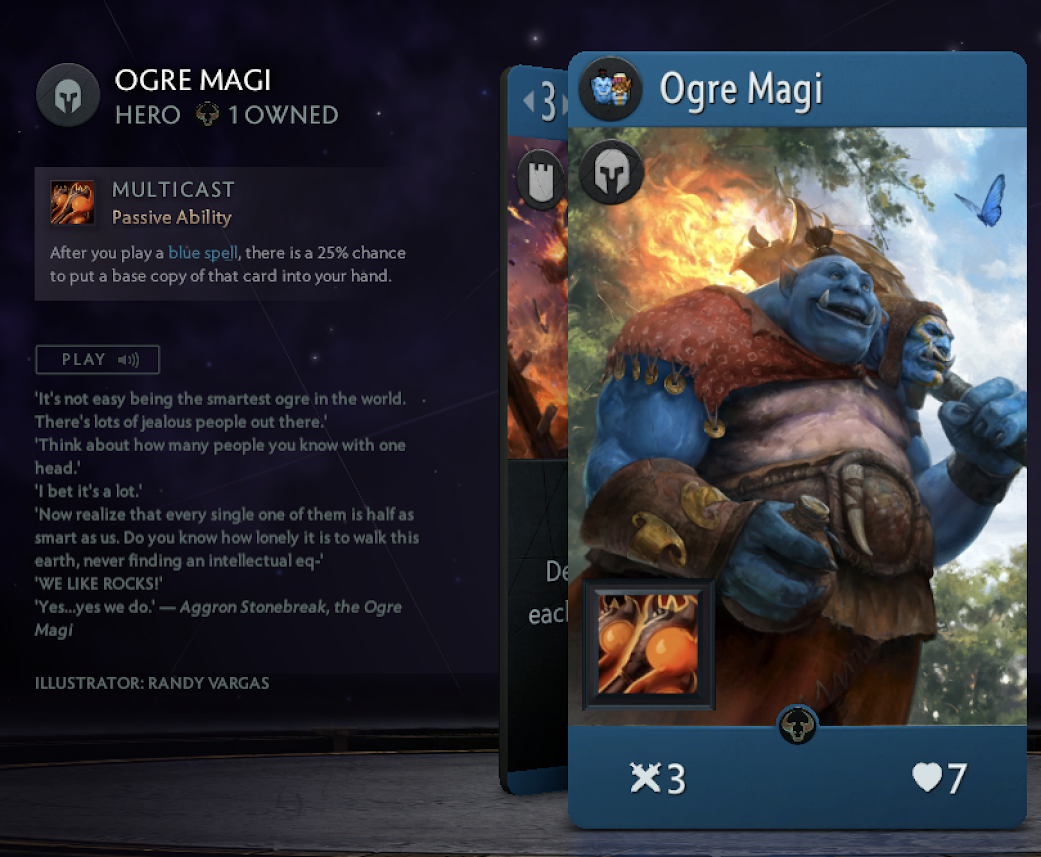 In Artifact, both players take turns playing cards, before the combat phase for that lane. This means you can potentially disrupt a 2-card combo the opponent plays by countering them in the middle of their combo. The bigger implication is in a less-intuitive rule here: the player who passes first in one lane will be the player who gets to take the first action in the next lane.

This has massive gameplay implications, and there will be many situations where you'll need to pass up the opportunity to play a card, so that you can go first on the next lane. This will mostly be seen with effects that can kill an opponents' hero and lock them out of being able to play their card.

So, these are the major four rules that make Artifact more complex than other card games, now let's get into the 3 phases in a turn in Artifact, and as we go I'll break down tips for each phase.

The first phase in a turn of Artifact is the deployment phase, although this will be skipped for the first turn of the game. The two melee creeps per side are randomly deployed into lanes, and then your heroes being deployed that turn are each able to be played in the three different lanes. 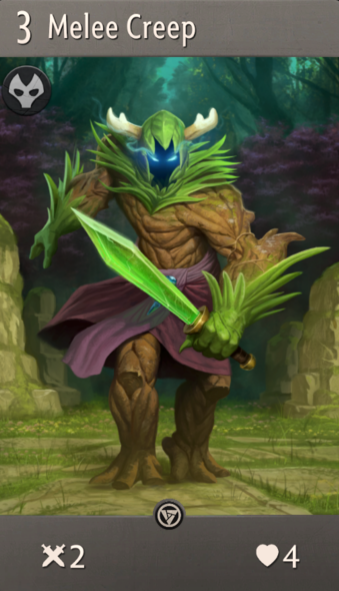 When choosing what lane to place a hero in, choose wisely! These are among the most important decisions you'll make in each game, as they will largely set the pace for the entire game. Additionally, it's important to take many things into consideration with deployment:

Color spreading: Since heroes of a unique color allow you to play cards of that color, try to spread out your colors onto different lanes when possible, to open up play options.

Opponent's choice: This is where the mindgames begin. Try to predict where the opponent will put their hero, and either avoid or fight in that lane, depending on matchup.

TIP: The left lane is the strongest of all of them, due to its ability to play first (and thus win the game earlier than the opponent can). Give a bit of a bonus towards winning this lane, for that reason.

The second phase in Artifact is the Action Phase, where both players alternate playing cards, until they both pass in sequence. At this point, every unit will attack its attack target. The main strategy in terms of deciding what cards to play is viewing all 3 boards, and deciding in advance which cards you want to committ to each lane. Make a plan for the entire round, not just the lane you're in, to best distribute your resources.

TIP: Sometimes you'll have to pass far ahead in advance for initiative. If the game will come down to which player can play first on the right lane, passing first left, to then be able to pass first mid, to "chain" initiative to the lane that matters, will very often be a gamewinning play.

ADVANCED TIP: Consider passing even if you have playable options, to force the opponent to play their cards first, allowing you to respond to what the opponent does. Do this only when you're sure your opponent will have cards that they'll play, because if they pass back, you just denied yourself the opportunity to play cards.

The final phase for each turn in Artifact is the shopping phase. Every time you kill an opponent hero or creep, you gain gold; 5 per hero, and 1 per creep. In the shopping phase, you spend your total gold on weapons, armors, and trinkets that can apply permanent buffs to your heroes, ranging from various stat upgrades, to giving them powerful active abilities.

Each hero can only be equipped with one item of each category, so choose carefully. Items are very powerful, as they cost no mana to play, thus boasting a lot of flexibility. 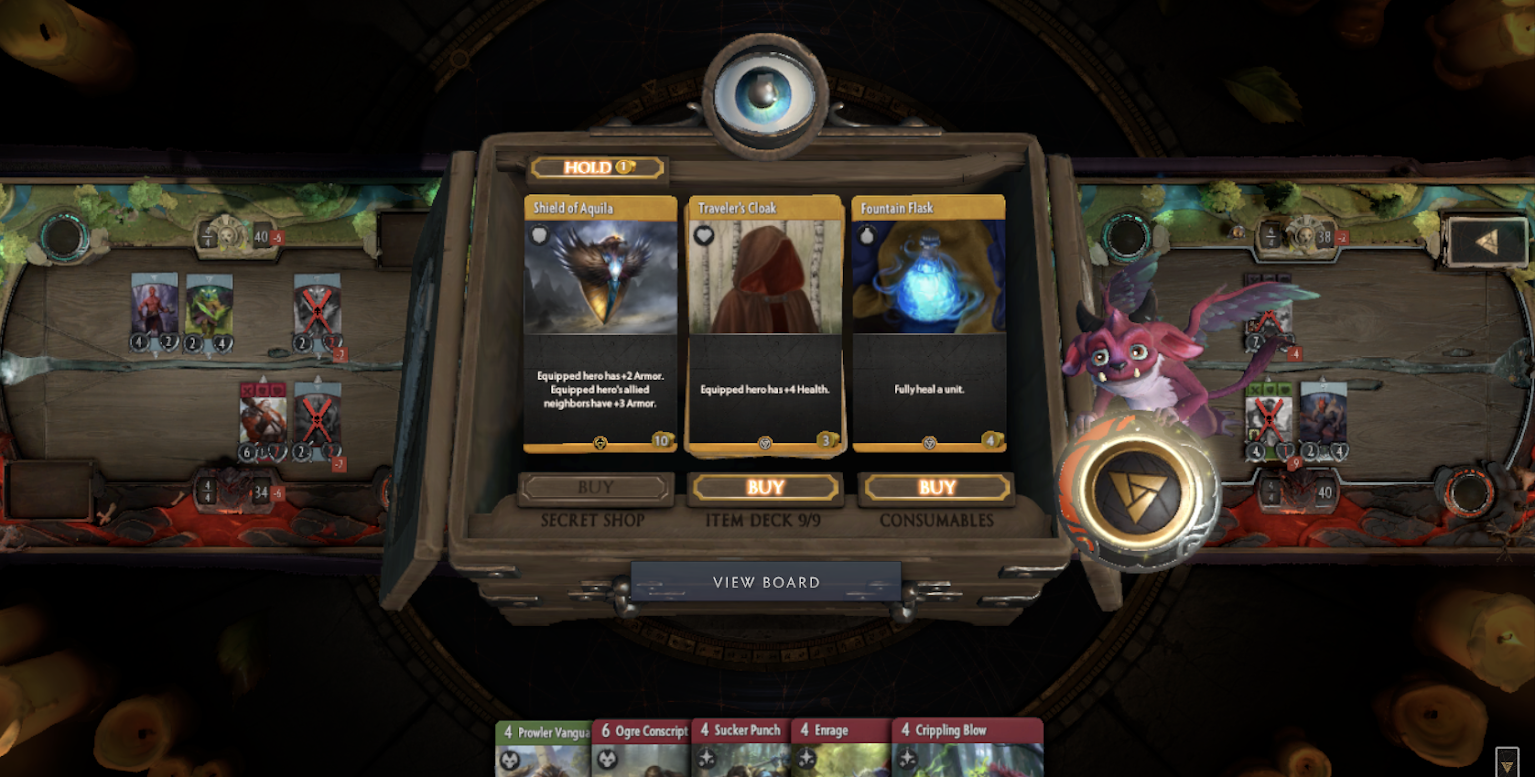 When you get into the shopping phase, you'll be greeted with three different shops. The left shop (secret shop) will stock one item, chosen randomly out of all the items in the game, and will show you a different item every shopping phase, unless you use the "hold" feature to spend 1 gold as to ensure the same item will be seen again next phase. The middle shop (main shop) is stocked from your own 9-card item deck that you build during the deckbuilding process, and replenishes immediately every time you buy an item from it. Lastly, the right shop (side shop) is stocked from a pool of four cheap consumeable items, that will heal your heroes, draw you cards, or allow you to reposition your heroes across lanes.

When entering shopping, take a survey of all the boards, as well as your current gold, and buy what you need. If one of your heroes is very low on health, you should pick up a cheap trinket or a healing consumable to restore it. If you have a hero on a lane you'd like to sacrifice, or you're feeling like you may be overcommitting to, a Town Portal Scroll or Blink Dagger is a great purchase to fix that. However, if you see items that you don't need right now, it's OK to hold onto your gold until the next shopping phase. 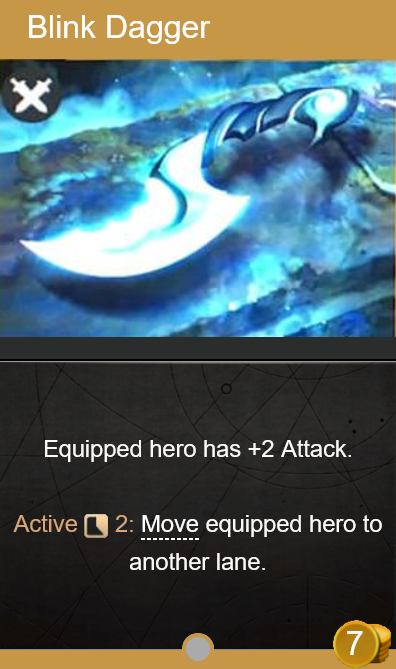 TIP: Don't exceed 9 items when building your deck; you want to reliably see the same powerful items over and over again.

And that's it! Those are the basics of Artifact, with some tips to give you guys a head start. Artifact as a game is extremely complicated, and it will take a lot more learning to become a top player for the game.

In part 2, I'll be breaking down one of the strongest decks in the game so far, and explaining how to play it.