Hunters have been my go-to strategy for climbing in Dota 2 Auto Chess. I recently used a smurf account to climb from Knight-9 to Rook-1 in 15 games. Of those, seven were Hunter games, which resulted in four 1st place finishes, two 3rd place, and one 7th place. Here's how to do it:

The Hunt is On

Hunters are a similar class to Knights in that you never have to transition in or out of them. They’re good units at all stages of the game and you can just pick up any hunter you see.

There are currently seven hunters in the game, and six are required for synergy. They are: Drow Ranger (DR), Beastmaster (BM), Sniper, Mirana, Medusa (Dusa), and Tidehunter (Tide).

Because Hunters are glass cannons (high offense, low defense), they need a strong frontline/crowd control to allow them to get time to build up damage per second (DPS). Any frontline will work for this, however. Usually any 2-star tank will be sufficient during the early game, but there are sample builds for early on:

God Hunters:
Mars (2 Star) + 3 Hunters + Any Tanks
Hinweis: Mars 2 is extremely tanky in the early game - you can run him even if you don’t have Gods active.

I usually just put in any two star I can get, but in general, I prefer Elf = God > Knight (Abba for undead) > Beast > the rest. You will sell these units for better frontline in the mid/late game, so it doesn’t matter too much what you start with. 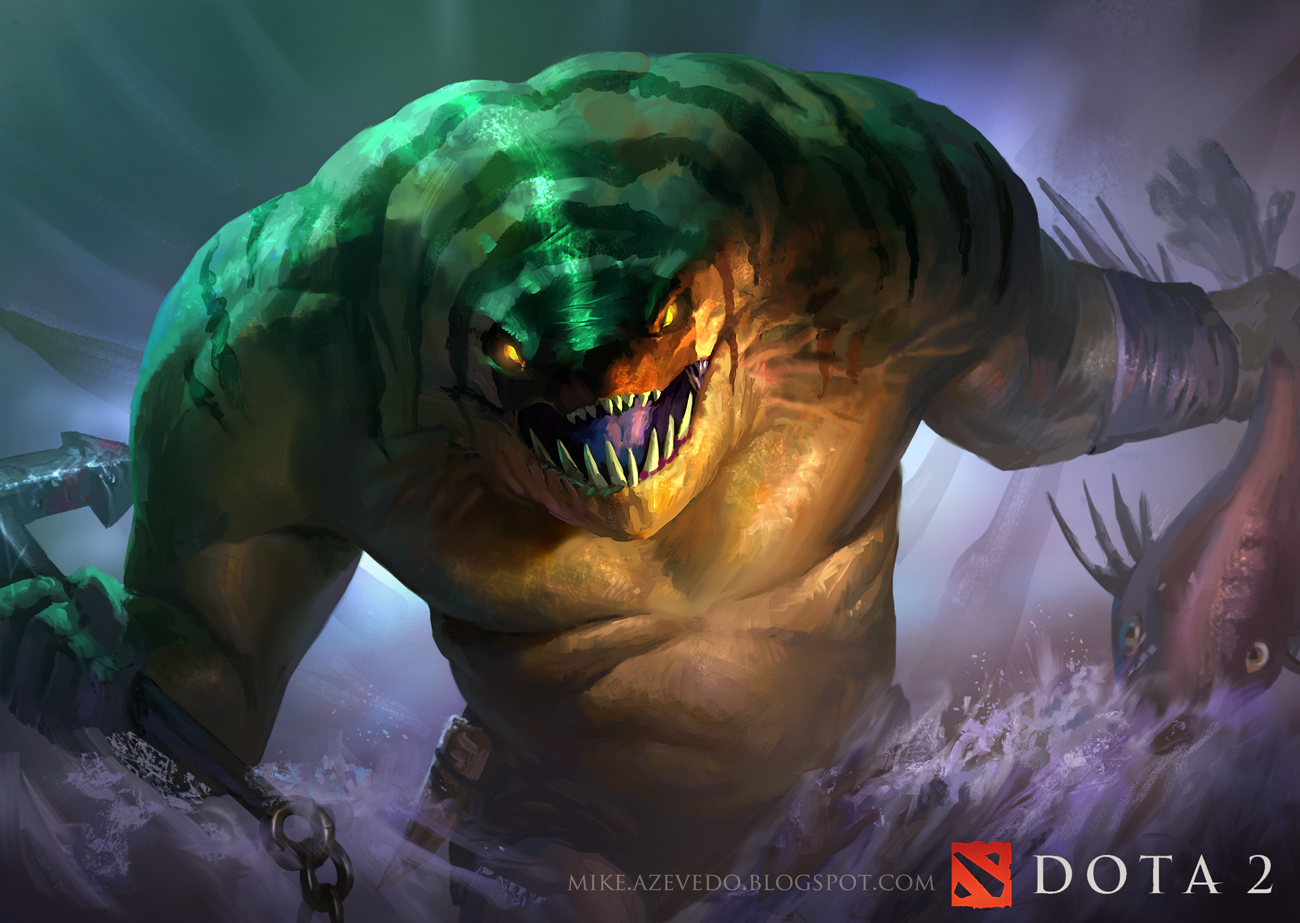 Tidehunter is a 5-star unit so I generally don’t plan on having him in my build. Source: Mike Azevedo 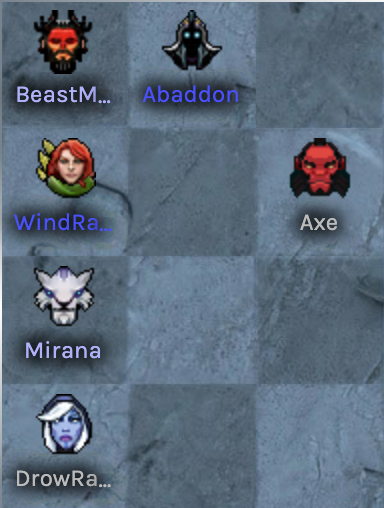 Hunters should always be placed in a straight line. This is done so that they all focus on the same target and burst it down before it can do anything. In Auto Chess, you always want damage to go to the same target - not spread across all the targets. 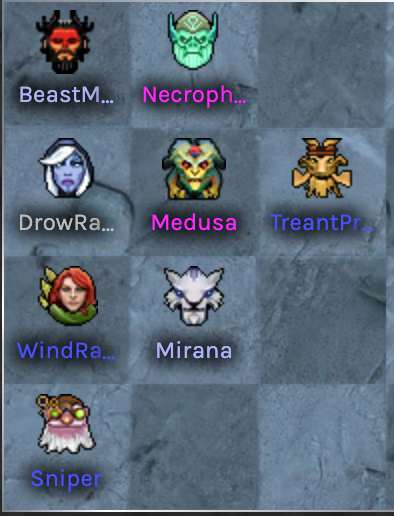 Using the same logic as in the beginning of the game, you're going to want hunters in the same column. Sniper is in the corner because he has the longest range, and won’t need to hop to hit someone. Mirana is in the position she’s in because she can off tank...also because she’s useless.

Six Hunters with Medusa + Undead synergy is the core build for hunters. If I get 6 hunters, I usually rush to level 8 to put them in along with Abba/Necro + Tree/any Tank.

If you never got any mana items, you might also consider putting a 2-star Medusa in the front line so that she can ult faster. 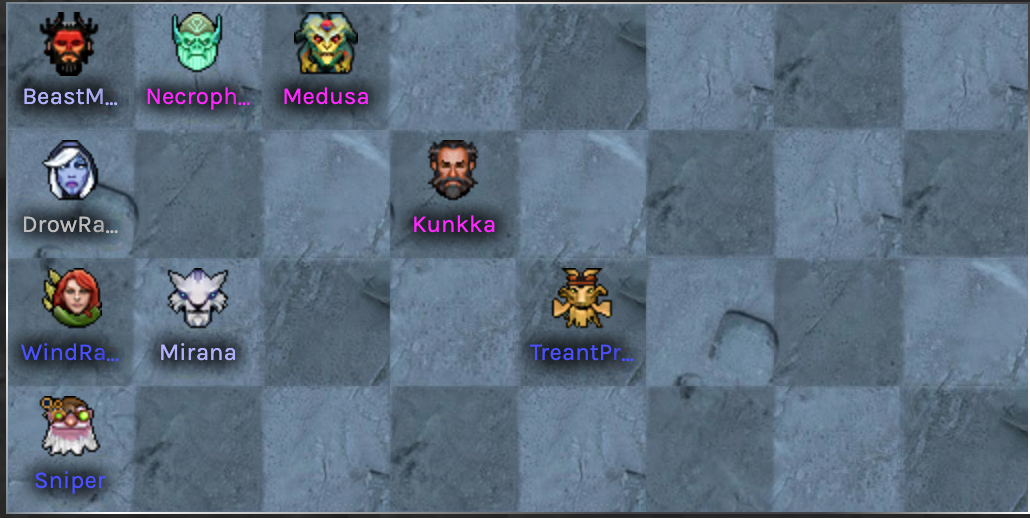 This is super important against mages and can win/lose you the fight depending on positioning alone. Be sure to scout and look around!

Tree/Lone Druid: Easy to 3 stars and both are huge tanky bois.

Tide/Sladar: You want Tide most of the time, but if you can’t get him, Sladar will suffice. This is important if your opponents are mages for the magic resist.

Mask Of Madness (MOM): MOM is one of the best hunter items, and if you get it within the first three rounds it will usually win you the game. Drow Ranger and Sniper are the best units to put MOM on - DR because she doesn’t have an active ult and you can usually 3 star her and Sniper because his ult makes him lose DPS. 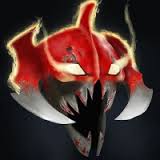 Any Mana Item: Be careful putting multiple mana items on the same hero, as they do not always stack. Here's a quick reference:

X = items do not stack

All of your mana items should go on Medusa, as any early Dusa ult will win you the fight. Make sure to not put any mana items on any of your other hunters as you will not be able to sell them and get the item back. If you can build a refresher on Dusa 2, she will win you the game 99.99% of the time.

Dusa wants all your mana...and a kiss. Source: Reddit

Which 3 Stars to Get
DR 3 and BM 3 are the only 3 stars I get in hunters. Mirana 3 is pitiful for the damage she provides and Sniper/WR/Dusa are too expensive. Since you always want 6 hunters in your build, it is super slot hungry. I value leveling up and putting in units to provide CC rather than rolling for 3 stars to get more DPS. You will have more than sufficient DPS with 6 hunters.

When Should I Roll?
I NEVER EVER roll before lvl 8. Unless I’m around 30 hp and in danger of dying, I always slow level (maintain 50+ gold for maximum income) then roll at level 8.

I hope this guide helps! Do you have any tips for climbing in Dota 2 Auto Chess? Let us know on Twitter: @SteelSeries!

Authors note: I wrote this guide in early 2019 for Dota 2 Auto Chess. While some of this does carry over to Underlords and mobile Auto chess, bear in mind that it may be outdated. It is missing the 4 undeads variant and the 3 hunter/3 warrior/2 beast variant for late game. Lastly, Mars 2 frontline is probably the most popular frontline right now for hunters.